The 2010 census records over 30 major languages spoken in Zambia. Seven of these are officially recognized as Zambia’s regional languages: Bemba, Nyanja, Lozi, Tonga, Kaonde, Luvale, and Lunda. English, the country’s official language, is spoken by only about 2% of the population as a first language, but it’s the most commonly used second language, especially by those with high education levels. The census indicates that Zambia’s most widely spoken languages are Bemba (spoken by 35% of the population), Nyanja or Chewa (20%), Tonga (12%) and Lozi (6%).

An urban variety of Nyanja (Chewa) is the lingua franca of the capital, Lusaka, used for communication between speakers of different languages. Nyanja is also widely spoken as a second language throughout Zambia. Bemba, the country’s largest indigenous language, also serves as a lingua franca in some areas.

Tools
Why we need to collect data on the languages of crisis-affected people (PDF)
Rapid Guide to Localizing and Translating Survey Tools (EN, FR, PT)

For more information, read about the project on our blog or contact info@translatorswithoutborders.org. 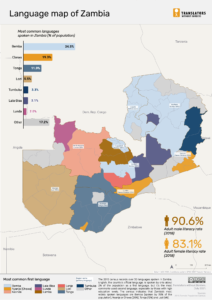 Static map showing the number of speakers and geographic spread of different languages in Zambia. Data is from the 2010 census. 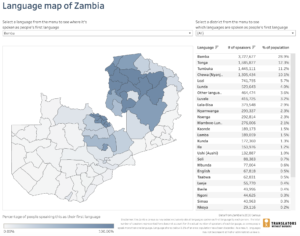 Interactive map showing the number of speakers and geographic spread of different languages in Zambia. Data is from the 2010 census.